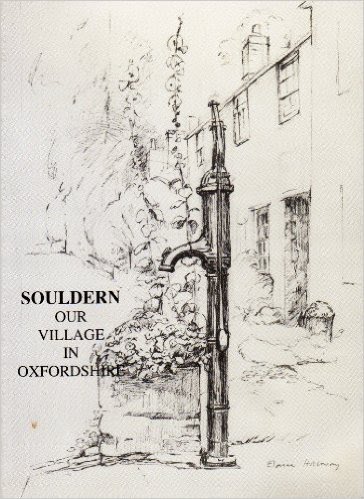 Much of the text and images in the history section of this site have kindly been provided by Ann Prescott from the sources of her book:
SOULDERN OUR VILLAGE IN OXFORDSHIRE

Ann Prescott compiled this book in 1994 and updated it in 2013. It contains many details, history of all the buildings in Souldern and copies of old photographs of the Village, The cost of each book is £10 and all proceeds are divided between Souldern Church, Village Hall and the Chapel. If you wish to purchase a copy please contact via the web form thank you 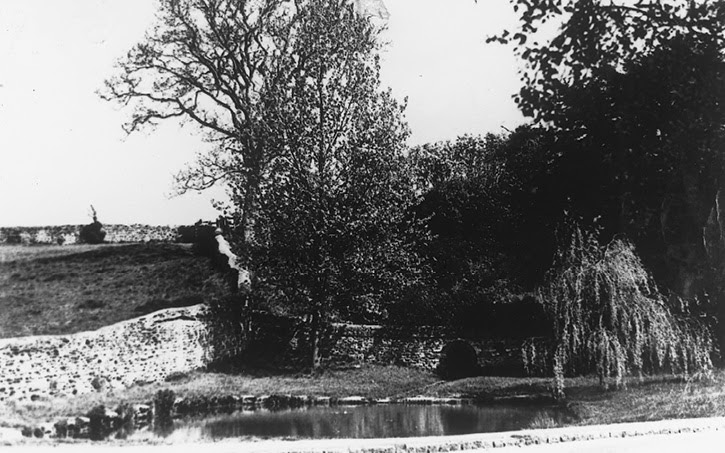 SOULDERN or “SULTHORN” as it was originally called was founded before Roman times — “Thornbush in a Gully” — it lies between the flood plain of the River Cherwell and the upland of the Great Oolite, from which limestone water percolates down to emerge as excellent springs. One of these may be seen as Souldern pond, old name — Town Well. A photograph taken in 1905 is shown.

The ancient highway “Aves Ditch” ran through the Parish, later linking with the Roman Portway just to the south.

The Normans established Aynhoe estate squarely across the road forcing travellers to make a detour around the eastern boundary, leaving Souldern as it is today — a cul-de-sac.

The Medieval village lay in a hollow, reached by gentle descent from the old Roman road on the east side. In 1316 it consisted of rude hovels circling the pond, built in local stone and roofed with thatch. The road to the Church formed the main Village street, with the original Manor House on the hill in Great House Close overlooking the Church from the east.

In 1577 Souldern was an important Roman Catholic stronghold in north east Oxford. During the civil War the village suffered from the quartering of six regiments of Parliamentary troops with the requisition of food supplies. In 1641 Souldern sent provisions to the King who was at Oxford.

During the 17th century an unusually high number of trades were carried on for the size of the population. By 1676 130 adults were noted by census, and in addition to the farmworkers, there were 2 Tailors, a Weaver, a Carpenter and a Smith.

The Oxford Canal was completed in 1790 and a coal and fuel depot established at Souldern Wharf.

A census in 1821 revealed the names of Lake, Coleman, Finch, Warmington, Sweetman, Jarvis, Westbury, Bates and Hitchman. These names still exist in the village today.

132 houses were recorded in 1851 — an increase from 60 in 1768 and 93 in 1811. By 1851 Souldern was a thriving community, borne out by the number of large houses which were built at that time. The Oxford/Banbury railway was completed in 1850. In 1893 the Reverend J.C. Bloomfield MA who was then Rector of Launton and Rural Dean, wrote a History of Fritwell and Souldern.

The Birmingham to London Railway was completed in 1910 and the Telegraph service arrived in 1914. By 1939 there were eight private tradesmen and the Banbury Co-operative Society.

In 1988 a Conservation Map was prepared for Souldern, a small part of the village was excluded, the dwellings omitted were built after 1950.

An appraisal of the Village was carried out by a Committee in 1989 and a booklet entitled “Souldern — a Self Portrait of a Village” was published with their conclusions in 1990. On one wall of the village hall there is a large Collage made by ladies in the village in 1989 showing most of the houses.

The M40 Motorway was opened on the 16th January 1991. This is built in Cherwell Valley and is about a mile away. The official party included members of Parliament, local dignitaries and the management and employees of the contractors who built the motorway.

Souldern today is a well preserved example of building in local materials. A few new houses have been added, and “infilling” has occurred.

The village has won the Best Kept Village Competition (in the small village class) five times since 1980.