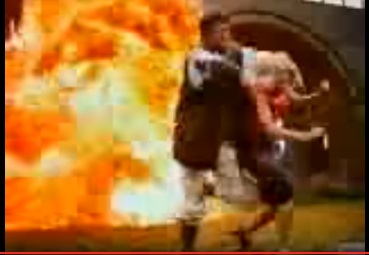 Minnie Driver in town for filming of new comedy

ACTRESS Minnie Driver and comedian Mel Smith were in Souldern last week for the filming of a new British action comedy. Crews spent two days last week just outside the village at a viaduct near to the M40 to film an explosion scene for High Heels and Low Lifes, directed by Mel Smith.

The land where filming took place belongs to Dawn and John Malins of Wharf Farm. Mrs Malins said: They were apparently looking for a location with a viaduct and the location manager saw a viaduct on the ordnance survey map. They needed one that was the right height in a grass field with cows. We were able to supply that.

The film crew arrived at the farm on Monday evening and filming took place on Tuesday and Wednesday. The scene involved a car driving into a field of cows and a box being thrown from a passing train into the field below.

Film stars Minnie Driver, Oscar-nominated for her role in Good Will Hunting, and Mary McCormack, of Deep Impact and Private Parts fame, were on location for the shoot. Railtrack allowed the film crew to film from the viaduct and paramedics and fire crews were on standby as the explosion was carried out. The Malins daughter Jessica, 23, managed to catch a glimpse of the action and Mrs Malin s sister in-law and her three children came over from Bicester to watch the filming. Dawn Malins, who spoke to Mel Smith and Mary McCormack, said: I was really quite surprised as we have never been approached before for any filming. It was a bit time-consuming but it was also quite fun. The people on set were all very approachable and friendly.

About 30 of the Malins 120 cows also got their five minutes of fame as they were needed for the scene. And the Malins son Mark, 25, and his friend Christian Wright, 25, from Somerton, supervised the cows for the shoot. On Wednesday morning Mark, who usually milks the cows, had to get up early to get them milked before another day of filming. Mrs Malins said: It was quite funny because the cows were quite laid back and when the car came into the field they wouldn t move out of the way.

The film follows the tale of two best friends, Frances (McCormack) and Shannon, (Driver) struggling to do good with limited resources. Frustrated with their lives, when they accidentally overhear a heist taking place in their neighbourhood, they devise a plan to blackmail the gang, but events spiral out of control.

The film is being produced by Fragile Films. It also stars The Fast Show's Mark Williams and is due for release next year.


Image taken from the film trailer, Text taken from an article in the Banbury Guardian (August 2000)