There are several good sources of information about Souldern on the internet, a few of them are collected here.

Wikipedia has quite an extensive entry for Souldern, as well an entry for The Church. There are also entries for the canal and the Cherwell Valley and Chiltern railways which pass through the parish.

The British History Online site has the full text of the extensive Souldern entry in A History of the County of Oxford: Volume 6. Originally published by Victoria County History, London, 1959. Other records include references to Souldern in The House of Lords Journal going back to 1707.

Vision of Britain through time

The Vision of Britain through Time site has collected census and other data between 1801 and 2001 and allows you to search it and generate all kinds of graphs and charts, for example this one of the number of houses in Souldern plotted against the census year. The Souldern Entry is found here. 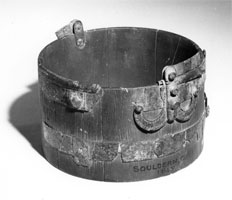 The Ashmolean Museum in Oxford holds a Saxon bucket discovered in Souldern as detailed in this page (further details of the skeletons found at the same site are in the Historical and Descriptive Notices booklet).

A collection of links to old maps held in public archives including a zoom and scrollable view of the map from 1742 shown here.

In 1986, 900 years after William the Conqueror’s original Domesday Book, the BBC launched a project to record a snapshot of everyday life across the UK for future generations. A million volunteers took part. The Souldern entry is quite small, but at least the village gets a mention, which is not the case for the original Domesday book, where Souldern is not listed, but clearly was existing at the time!

An online collection of scanned documents and OCR text curated by the University of Leicester. This was the original source of the pages for the Souldern directories of 1852, 1895 and 1907.

Online access to census and other records in table or graphical form, specifically filtered to Souldern data.