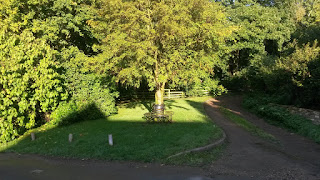 The Green which is owned and maintained by Souldern Parish Council is situated at the southern end of Bates Lane, it was originally reserved for “health and recreation”. Going back to the early 1300's some of the villagers houses would have been clustered around this area, and they would have been little more than rude hovels, being built of local stone and covered in thatch.

In 1824, next to the Green, 17 thatched cottages were built for the use of the poor in the village. These cottages fell into disuse and were demolished, the land being sold to the owners of Souldern Manor.

The Green has a seat which was erected in 1935 commemorating the Jubilee of King George V. There is also a plaque stating that the first tree planted on the 7th April 1937 was to commemorate the coronation of King George VI on the 12th May 1937. The present tree planted inside the Jubilee seat is in memory of Ewart Gordon Kimnell and was planted in 1965 by his widow.