In August 1845 Parliament passed an Act for the Great Western Railway to build the Oxford and Rugby Railway from Oxford via Banbury to Rugby.The proposed route ran for 50 miles (80Km) alongside the Oxford Canal,however the northern section was never completed. In 1850 a 24 miles (39Km) single track broad gauge section opened from Oxford to Banbury. This section was improved to be a double track mixed-gauge track on 1 October 1852.

This railway now forms part of the Cherwell line from Didcot to Banbury via Oxford. It runs along the western edge of the Parish in a cutting just east of the Oxford canal. 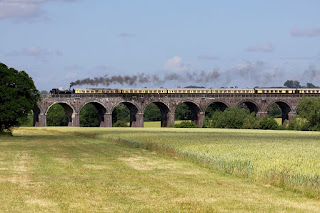 In 1910 the Great Western Railway completed a new main line linking Ashendon Junction and Aynho Junction to shorten the route between London Paddington and Birmingham Snow Hill. It passes through Souldern parish just east of the Oxford and Rugby railway,The line enters Souldern at the northern entrance of the the 1,155 yard (1,056m) long Ardley Tunnel. It then crosses streams in the Cherwell valley via two viaducts before joining the ORR (Cherwell valley line) just north of the parish boundary at Aynho Junction.

The railway is now part of the Chiltern Main Line. 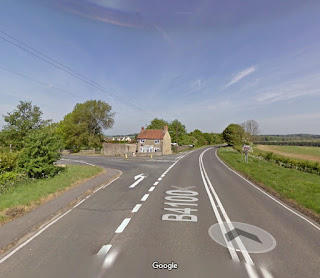 When Britain's principal roads were classified early in the 1920s, the stretch of the former turnpike between Bicester and Twyford was made part of the A41. In 1990 the M40 motorway was extended north of Oxford to connect with the motorway network around Birmingham and the Bicester - Twyford stretch of the A41 was reclassified as part of the B4100. 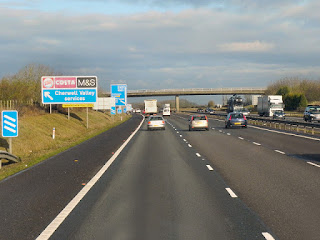 M40 travelling North towards Junction 10 for Cherwell Services and Souldern.

The motorway between London and Oxford was constructed in stages between 1967 and 1974. Construction of the extension northwards from Oxford to join the motorway network south of Birmingham  began at Warwick in October 1987, with work on the section around Banbury starting in February 1988, and finally the section north of Oxford in July 1989. The section between the M42 and Warwick opened in December 1989, and the remainder in January 1991.

The first service station opened as Cherwell Valley services in 1994 just south of the parish boundary at the junction with the A43. On 15 April 2010, the main building was destroyed by fire and had to be rebuilt. It re-opened on 30 June 2011. 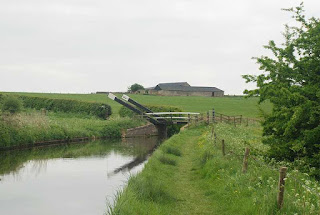 The Oxford Canal is a 78-mile-long (126Km) narrow canal linking Oxford with Coventry via Banbury and Rugby. It connects the River Thames at Oxford in the south and, to the Grand Union and Coventry Canals in the north.

Construction of the canal began in 1769 near Coventry, by 1778 the canal had reached Banbury. Work on the final stretch to Oxford did not begin until 1786, reaching the outskirts of Oxford in 1789. The final section into central Oxford was ceremonially opened on 1 January 1790.

The section between Banbury to Oxford uses many features designed to reduce costs, such as wooden lift or swing bridges instead of brick bridges. Deep locks were used wherever possible, with single gates at both ends instead of double gates. A lifting bridge is within the parish and Somerton deep lock is just south of the parish boundary.

Image of the viaduct copyright Martin Loader, used with permission.

Image of the Canal and lifting bridge from pgdl.co.uk