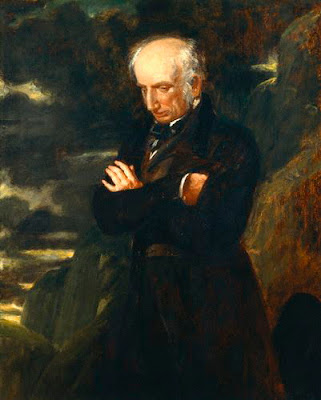 The poet William Wordsworth (7 April 1770 – 23 April 1850) stayed in Souldern in 1820, visiting his friend and former fellow student at Cambridge University, Robert Jones who was Rector of Souldern and lived in the (old) old Rectory.

Wordsworth wrote the sonnet  ‘A Parsonage in Oxfordshire’ after staying in Souldern.

A Parsonage In Oxfordshire

Where holy ground begins, unhallowed ends,
Is marked by no distinguishable line;
The turf unites, the pathways intertwine;
And, wheresoe'er the stealing footstep tends,
Garden, and that domain where kindred, friends,
And neighbours rest together, here confound
Their several features, mingled like the sound
Of many waters, or as evening blends
With shady night. Soft airs, from shrub and flower,
Waft fragrant greetings to each silent grave;
And while those lofty poplars gently wave
Their tops, between them comes and goes a sky
Bright as the glimpses of eternity,
To saints accorded in their mortal hour.